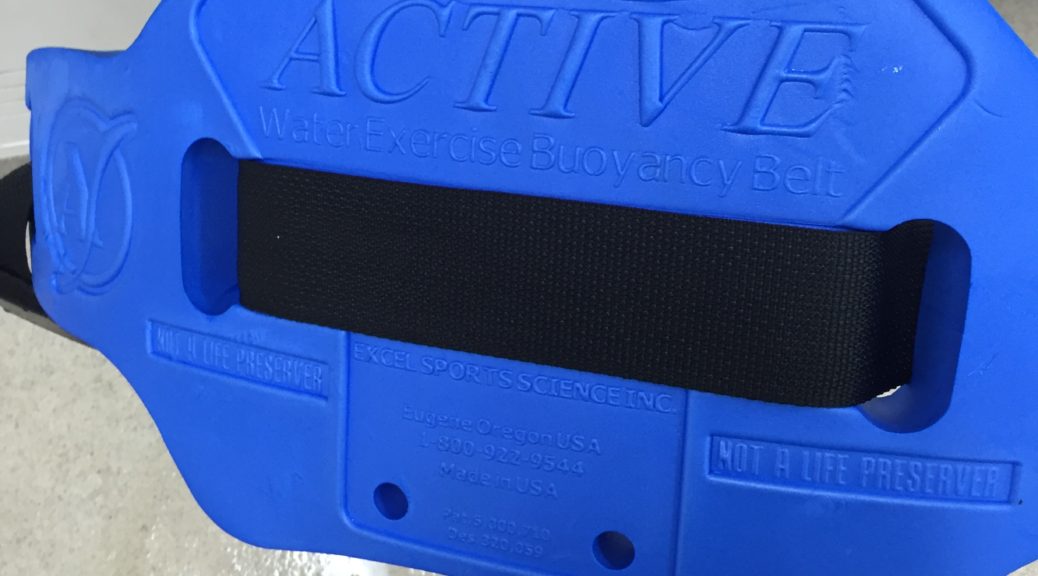 It’s been 6 weeks since that fateful run where lightning bolts shot down my leg.

When the initial MRI was taken, and my sentence was given (12 weeks until running, etc.), a part of me held out hope in the back of my mind that the doctors were just being conservative. C’mon – I’m the girl who returned from knee surgery to win World’s Toughest Mudder exactly 8 weeks post-op. Surely, by 6 weeks out, I’d be close to running again. I’m superhuman, or so people tell me.

Instead, after 5 days of testing walking about, I’m back on crutches. 4 weeks of non-weight bearing, they initially told me. Never would I imagine it could possibly be…more. (c’mon…I’M SUPPOSED TO HEAL LIKE JOHN CENA, PEOPLE)

The first week of injury was excruciating – I’d liken it to an addict in withdrawal from running. After a week, I thought I got over the hump. Things started feeling better. I got into a routine – 4:30 a.m. meant, not wake-up time for hitting the trails, but wake-up time for heading across the street to NorCal CrossFit for some quality time with the AirDyne (arms and one leg), and the ski erg (initially sitting down). Evenings meant swimming with a pull buoy, and eventually adding in kicking and aquajogging. 3-4 weeks out, and I got into my routine. Oddly enough, save for the odd twinges while flicking through Instagram, I stopped missing running, mainly because I had forgotten what it felt like.

I had found a new normal.

But somewhere around week 4, frustration began to set in. I SHOULD be getting better, I said. And, I was. The random shooting pains when I took a misstep on crutches were no longer there, and the dull ache began to subside.  While aquajogging and swimming did nothing for my heart rate, I found I could keep my heart rate up with the erg and AirDyne, and use the pool time to focus on therapeutic movement and people watching while I bobbed along in my (quite fashionable) Aquajogger. Side note: I’m not ashamed to admit it – I’ve come to sort of enjoy aqua jogging (errrr… “pool running”)

So when the doctor told me to transition off of crutches (he was frankly surprised I stuck with it all 4 weeks. #goodAmelia), I gladly accepted. Flung them aside like Crutchie from Newsies, and was ready to declare myself a healed woman. But I found that walking still wasn’t COMPLETELY pain free. I chalked it up to muscle imbalances and lack of use on my right side, thinking that it was muscular pain, and would eventually even out and return to normal. But the more days I walked on it, the more the familiar adductor tightness return, and pain returned in the evenings while sleeping, or during the day while sitting at work.

HOW?! WHY?! What did I do wrong? Did I push too much? Was the aquajogging too much? The walking? And the panic started to set in – did I refracture? Did I just undo all 5 weeks of recovery with 5 days of weight bearing?

I spent several days in a panic. Silly, stupid Amelia. Give her an inch, she’ll take a mile.

So we redid the MRI. And, in the process, I learned a thing or two about MRIs. Apparently, there are shitty MRI machine (less powerful magnets) and good MRI machines (really powerful magnets). My initial MRI I had done on a shitty machine (unbeknowest to me – was the only place that could get me in), which showed a tiny crack. We did the follow up on the Rolls Royce of MRI machines, and there was good news, and bad news. Good news – bone showed thickening of the cortex, which means healing is happening (yay!) and I’m being a good patient. Bad news – apparently the “tiny crack” was actually much, MUCH bigger than we thought (think – not a creek, but a river). And it’s still cracked, which would explain why I still can’t walk pain free.

What’s more – it’s not your typical fracture – instead of cutting transverse and perpendicular across the bone, it’s longitudinal – running down. Apparently, this is SUPER rare, with only 12 cases having been reported in literature (according to this this nifty 2016 study, thanks Google – http://www.ncbi.nlm.nih.gov/pmc/articles/PMC4811848/). So, it’s me and the 80 year olds, breaking their bones DOWN the shafts. Call me number 13.

So, the original prognosis, my hopes of soon getting unleashed into the world of weight-bearing, bikes, and ellipticals (who would have thought I’d get excited about using an elliptical?!) have been dashed, and I’ve battened down the hatches for a much longer recovery than I anticipated.

No, I don’t know when I’ll be back to running. And racing. So please don’t ask.

A girl who can manage to put that substantial of a fracture through the supposed “strongest bone in the body” can certainly get through this.

I’m not looking for sympathy. Not looking for the “this will make you stronger” or the “everything happens for a reason.” I realize life could suck way worse than it does right now. Objectively, aside from a broken leg, I have pretty fantastic life. I write this from a place of acceptance (ok, fine – some kicking and screaming and crying still. And some anger – wtf, docs?! HOW did you not see that?!), and an admittance that recovery isn’t always a straight line. That our bodies heal on their own timeline. That I can’t WILL my bone to mend itself.

And hell – that I wish I had a better magnet on that first MRI so I could have been prepared for just how long this stupid bone “that’s stronger than concrete” will take to heal.

In the meantime, I’ve committed myself to a daily (sitting) meditation practice (5 days in! go me!), taken up adult coloring books, perfected the BeetElite gummi bear recipe, and I’m on the road to giving myself a shoulder overuse injury from 6 weeks of upper body exercise and crutch use. Womp. Womp.

Round 2 of crutches has commenced. Let’s pray I don’t have to go all 10 rounds with those metal bastards.

One thought on “Recovery: On realizing you aren’t superhuman”