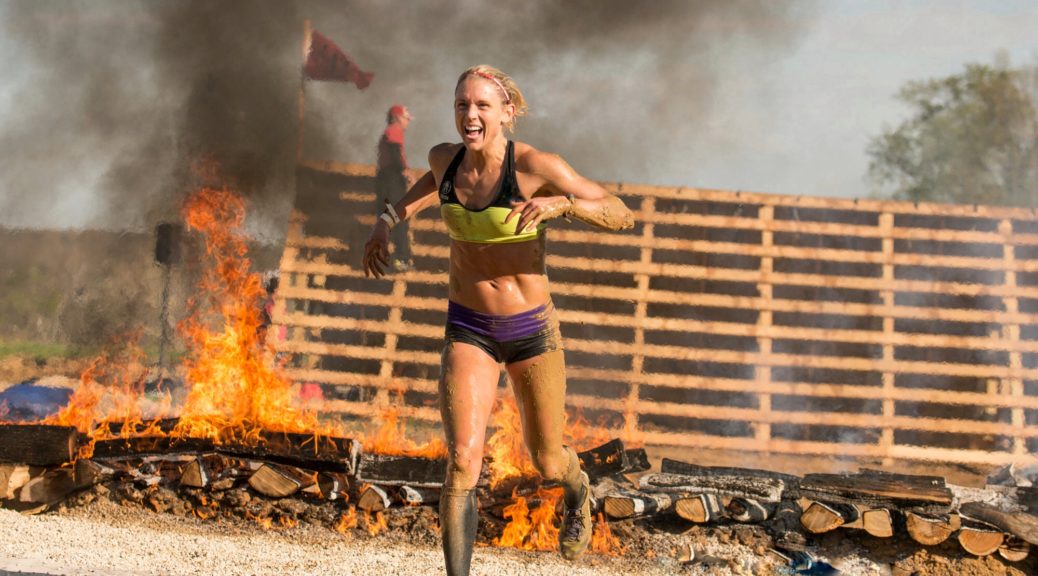 September is a month that brings up a lot of feelings for me. It’s the start of the championship season for obstacle racing, with Spartan Race World Championships kicking it off.

It’s a month for me with a lot of memories, most of them really great. But it’s a month with a lot of painful ones as well – years of being paralyzed by the fear of not winning, and years of being sidelined not being able to compete. And this is the first year where I’m voluntarily not running it – not due to injury, but out of choice. While I shifted my focus from obstacle racing to trail and ultras a few years ago, I always kept one foot in the obstacle racing world. For the first time, I feel like that foot is slowly letting the door close, and I don’t know quite how to feel about that. And this feeling isn’t limited to obstacle racing: I’ve been out of competing long enough now at…ANYTHING…that I’m aware of the thought that I’m sheepish to even call myself an athlete. The idea that I no longer know my place is unsettling for me, and my mind has been pummeling me with questions and insecurities and doubts surrounding it.

What would have my path been like if it hadn’t been riddled with stress fracture after stress fracture? Was I ever really that good, or did I just get into the sport early on? Where do I fit in now in the athletic world? Do I want to? And what’s my path going forward?

It’s also my birthday at the end of the month. As much as birthdays have always been a non-event in my life, they do signal the passage of time, and time is something I think about a lot as it relates to aging and being an athlete.

So, for better or worse, I tend to get introspective during this time of year, assessing where I’ve been, and where I’m going. Assessing my evolving relationship with sport. And assessing all the feelings that come with it.

“I still want to compete,” I told my therapist when I was at Opal, “but I don’t really care about winning anymore.”

A simple question, right? But my relationship with competition and winning has been a messy one, to say the least, and one that I’ve written about at length. I spent years fixated on winning, and deathly afraid of what would happen if the winning stopped. It makes me sad to look back on those years, because I wish I had stopped to really take in everything and enjoy it. A long break from competing due to back-to-back stress fractures caused me to first confront this twisted relationship, and in response, I swung to the other extreme, proclaiming it was all about the process, about “racing happy,” and that results didn’t matter.

In hindsight, I question whether that response was a mechanism for me to take pressure off of myself, and in some ways, give myself an “excuse” if I could no longer compete at the level that I used to. And frankly, I really HAVEN’T had the same results as an athlete these past few years as I did in the first years of my racing career. Granted, I imagine the four stress fractures and my body finally throwing its hands in the air after so many years of mistreating it with an eating disorder played a role in that, but I don’t know for certain. It really could just be that, hey, I’m getting older, and other athletes are getting better.

But in taking a step back from competing this past year, I’ve become acutely aware of one thing: I still have that competitive fire. I’m chomping at the bit to race again (in whatever form that may be). But my therapist’s question has echoed around my head: what if I DO value winning? What does that say about me? Is the only reason I compete to win and stroke my ego? Asking that question of myself made me SUPER uncomfortable, which means there was probably something to it.

With that in mind, I leaned into it, and asked myself the hard questions. I spent a lot of time this past year diving into my values and being curious about how I’ve related to sport, what role sport plays in my life, and how to navigate it going forward as I age (also given the uncertainty of how durable my body is). I’ve broken it down into three values (and the associated positives/negatives):

Winning: the value of being on top of the podium. It feels great in the moment. It gives me motivation. People love a winner. Sponsors love winners. But winning never fully satisfied me. The target and goalpost are always moving. And when I peg my self-worth to my results, I become petrified of what happens when that stops.

Participation: the value of being in the arena. It leaves me with a sense of community. It gives me an identity. I don’t have to necessarily be racing in order to participate. But participating doesn’t entirely fill my soul. There’s a piece missing.

Challenge: the value of taking on things I don’t know are within my capabilities. It doesn’t have to be tied to a race or results. It’s highly individualized. It gives me an opportunity to learn new skills. But it comes with the real possibility of failure or embarrassment. It’s not as black and white as winning, or chasing podiums. It doesn’t necessarily come with the external validation and admiration that winning does.

I know, from years of experience, that winning races never brought me happiness: the goalposts were always moving, and no number of wins would EVER be enough. And if I look at the times or races or scenarios where I felt most fulfilled, they weren’t necessarily races that I won.

They were races where I was in over my head. Where the possibility of failure was real. Where I had zero idea what I was doing there.

And through this process, it became clear to me that what I value, what drives me every moment of every day, isn’t winning, it’s challenge. And that value of seeking challenge has permeated every aspect of my life.

Nothing ignites me more than the thrill of a challenge and the unknown, and seeking challenge is a theme that has given me purpose in almost everything I do. It led me to tackle my first 24-hour obstacle race when I had never run more than 10 miles in my life, it’s the reason a race like the Barkley Marathons lights my soul on fire, and it’s what got me involved in obstacle racing in the first place.

But it also has a dark side: a lot of what has driven my eating disorder is the pursuit of challenge – seeing how little I could get by with, depriving myself of all pleasure. And, through lots of therapy, we’ve recognized that when I don’t have pursuit of challenge in other areas of my life (e.g., in times when I’ve been sidelined by injury), the pull towards the eating disorder gets stronger. It filled that competitive need, that challenge value, in a warped and fucked up way. (Being drawn to challenge also has proved problematic in for relationships in my life, but that’s a whole ‘nother ball of wax we won’t devolve into…)

But with all the hoopla building around the Spartan world championships, I joke around that I’m “old and washed up” – relegated to “legend” status (which, I guess, isn’t really a BAD status!). But if I’m honest with myself, that feeling is uncomfortable for me – it makes me feel like a horse being put out to pasture. Like I’m relegated to reminiscing about my “glory days,” which is something I’ve never been super comfortable with.

And if I drill down on WHY this makes me all so uncomfortable, it’s because I know that, at my core, I don’t believe it.

I’m not done yet. In fact, I’m pretty confident I’ll never be done.

Why? Because challenge is a value that doesn’t die. And it’s independent of winning. If winning was my overarching value and sole reason for competing, I would have walked away from sport a long time ago. I have zero desire to do that.

Instead, I’m more excited than ever to get back into the arena, with a clearer guiding path: seek races that give me that purpose, that fulfill that challenge value. It’s one of the reasons you’ve seen me dabbling in open water swimming and biking more recently – I’m being curious. I’m testing. And in opening myself up to new adventures, I feel alive.

(This isn’t to say that I won’t hop back into the obstacle racing arena at some point, but I’m aware that the “challenge” pull is no longer there for me. It’s what drew me in, and what sustained me for many years. And yes, it’s a challenge to try and compete with the level of women nowadays (and I’ll be the first to admit that I’m nowhere near their level right now!), but right now, it’s not lighting my soul on fire.)

But more than anything, I just want to be in the arena – an arena that I’ve sidelined from for far too long. In fact, this has been the longest I’ve gone without racing, and I’m aware of the thought that people may have written me off because of that. And while that does bother me a bit, it doesn’t unnerve me. Because as much as I joke about being old and washed up, and I have never, not even once, written myself off.

No one wins forever. Whether that’s due to aging or injury, at some point, your results aren’t going to be the same that they once were. And for many athletes, if you truly value the winning aspect, that decline is enough to walk away. I don’t judge that. I get it.

But that’s not me, and that will never be me. I want to be that 70 year-old running Western States, or that 90 year-old swimming the Alcatraz crossing. Challenge evolves with age, it evolves with capability, and it asks of us humility. Humility to put aside the results, and define what winning means for us at that moment in time. The great thing about valuing competition and challenge is that it drives us regardless of the results.

I never answered my therapist when she asked me that question. But now, months later, here’s what I’d say: there’s nothing wrong with wanting to win. We all love to win. But I’m learning that’s only a tiny piece of what drives me. And if winning is my sole guiding value, it’s always going to be hollow.

If “consumed with winning” was Amelia 1.0, and “results don’t matter” was Amelia 2.0, then I guess “challenge seeking” is Amelia 3.0. I’m sure there will be many more versions that follow, but I think I’m going to try and stick with this one for awhile.

I’m excited to get back into the arena. Let the lifetime of challenges commence.

*Note: I have been planning to write about how I untangle sport and my eating disorder, and the process of working through that. It is in the works, and I don’t really touch on it here. But I know it’s something that I’ve had a lot of curiosity about, and that many others wrestle with as well. Just trying to find the words that really resonate with me at the moment, and will pen to paper those at some point!

9 thoughts on “Where Do I Go From Here? The Ever-Evolving Relationship with Sport”