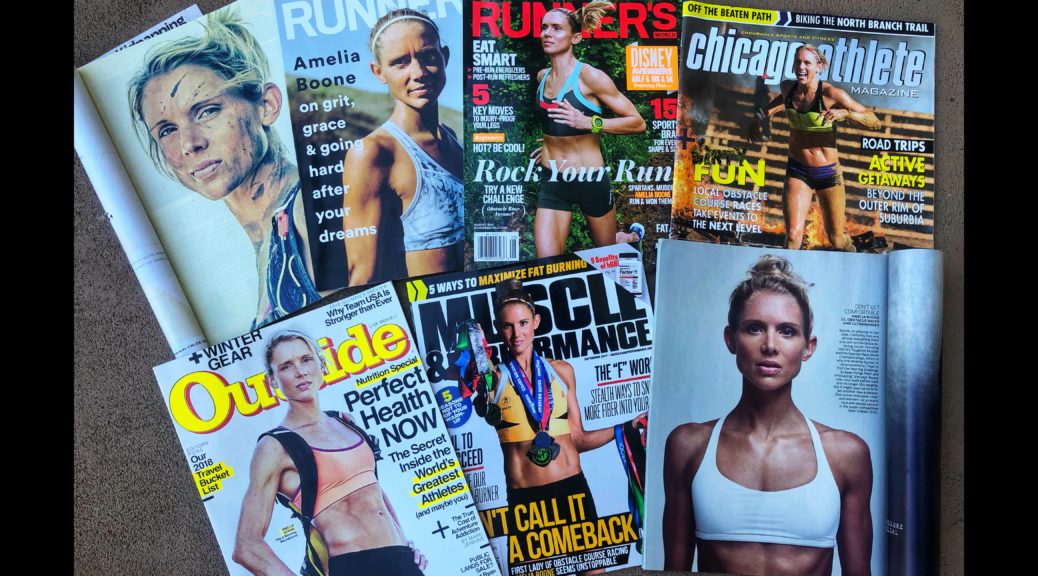 (Content warning: This post contains my thoughts and feelings around my body and pictures of me. There are no numbers, behaviors, or weights.)

In early 2017, Men’s Health reached out to me to feature me in a story about obstacle racing. As part of that, there would be a photo shoot. I internally cringed a bit. I’d had a tenuous relationship with photo shoots for years, but a different kind of guilt was emerging this time. I knew that I was in a rough patch with my eating disorder, and I was aware that I was not comfortable in my body at the moment. Namely, I thought I was too lean. While the story wasn’t about my body (it was about tackling your first OCR), I felt a sense of guilt that my image would be attached with the story – that I could be projecting an unhealthy ideal.

I’ve struggled with the thought that I’ve somehow been complicit in promoting an unhealthy body image by being on magazine covers and in photo shoots without disclosing my history with an eating disorder. I’ve been aware of feeling guilty for taking part in photo shoots where I’m decently exposed, knowing that how many body looks may cause others to compare. I’ve wondered if I’m part of the problem by projecting an aesthetic to women that could be unattainable in a healthy manner.

Honestly, it’s weighed on me. I’ve felt an overwhelming sense of guilt that I could be perpetuating the issues with diet and wellness culture.

Since opening up about my eating disorder struggles, I’ve had people reach out to me and tell me that they used to look at my body as the ideal, that they would use me as #fitspo. And I’m saddened at this: knowing that yes, my body may have been the cultural “ideal” by some, but that at a certain point, it stopped functioning how I wanted it to – in a strong and capable manner.

I’ve never wanted to be a body ideal. To be honest, my body has never been a source of pride for me, or something that I’ve “owned.” In fact, I’ve made a point intentionally, over the years, of NOT speaking about “how to have a body like me” or engage in stupid fitspo shit like “WORK HARD AND YOU TOO CAN HAVE THIS BODY.” I’ve intentionally deflected questions about workout routines, about diet, about my aesthetic. I’ve joked that NO ONE should take diet advice from me, and I (clearly) still stand by that. Because of my internal conflict, I’ve tried to never encourage focus on my body or my diet.

But yes, I am in a lot of pictures in very little clothing. That’s not because I’m trying to show off my body or make people jealous – frankly, it’s practical. For obstacle racing, the fewer clothes you wear, the less the mud and water sticks to you. In full honesty, I’ve always been SUPER uncomfortable in just a sports bra (but yes, I DO hate pants with a vengeance).

The clothes I wear have little, if anything, to do with body image and aesthetic. If I look back over the history of my eating disorder, it didn’t start out of body image concerns. Weight loss was never a goal for me. It may be difficult for some folks to believe, but body image and weight actually may have very little to do with eating disorders for some folks. I’ve been super uncomfortable with my body at times, but it hasn’t been about the weight or shape. (that’s a deeper-rooted discomfort that exists regardless of the size…and a separate topic entirely!) Body image and weight actually wasn’t at the forefront of my struggles for a long time, though I will admit that being in the media spotlight did start to bring it into the fold.

The funny thing is that the most proud I’ve ever felt about my body has been in the times when I have felt strong and functional and racing well, regardless of what it looked like. When I can thank it for running non-stop for 24 hours or when it carries heavy-ass shit up a mountain. That’s when I’m proud of my body. Not when I’m pictured on a magazine or have a random stranger compliment my arms. And the times when I feel like I have looked very unwell and too thin, I have been ashamed of my body because it’s NOT functional and cannot do the things I love to do without breaking.

(In theory, you would think that knowing this and feeling this way would be easy enough motivation to break out of the disorder. It helps, sure, but if only mental illness were that simple. But I’m making this point because there’s a lot of misconceptions about the causes of and motivations for eating disorders and how they manifest.)

That’s all an aside, though. Regardless of how I’ve felt about my body or how much or little that has factored into my eating disorder, the public has seen an image projected of me over the years in magazine, photo shoots, and race photos.

So while eating disorders are not about bodies, I’m going to address this because it’s a common misconception.

Let’s take this picture of me.

If you didn’t know about my eating disorder, many folks would say this is the product of discipline and being an athlete.

But knowing about my eating disorder, many folks would say this is the product of starvation and disordered eating habits.

Honestly, I don’t know. A woman in the sauna the today turned to me and said “I’m trying to lose weight and you have an amazing body: what’s your secret?” I blinked for a few seconds, and answered “I have an eating disorder.” (Note to self: if you ever want to kill a conversation instantaneously, this works quite well).

While I understand there is controversy around the “set point” theory, the correct answer about my body may actually be “genetics.” As I continue to feed and nourish my body fully, I’m still trying to figure that out. There are folks who have completely healthy relationships with food and are in smaller bodies (those folks tend to generate a lot of envy and hate from people: “why can they eat anything they waaaaaaaant?”). There are also folks with completely healthy relationships with food who are in larger bodies. In times when I’ve been in a solid place in recovery, I’ve still been in a smaller body. That’s not to say that’s where I’m going to end up now. I just have to trust that my body knows where it needs to be.

So how does this relate to the media? Because I know how detrimental diet culture and body ideals are to our society, where is my responsibility? For example, should I have said to Runner’s World “sure, I can be on the cover, but just to let you know, I have an eating disorder and my body could be a product of it?”

It’s something I’ve wrestled with internally a lot. While I was at Opal, I was asked to be part of a photo shoot for one of my sponsors. I spent MANY process groups crying over it. Am I causing harm by being photographed in my body, I asked? I felt the guilt. It’s gnawed at me.

My initial response in life is always to take the blame – 100%, it’s my fault.  It was actually my treatment team that suggested to me that maybe I don’t have to shoulder 100% of the responsibility here. That the media has a responsibility. That consumers have individual responsibility. And that feeling guilt and shame over my body or how it’s portrayed does nothing to solve the problem.

So what DOES solve the problem?

I’m aware that this is a tricky topic to talk about, especially since I’m in a smaller body. So step one is for me to acknowledge and accept that I have thin privilege. I’m aware that this post may come across as “woe is me poor girl in a smaller body.” I hate the idea of “skinny shaming” and that’s not what this is about. I’m also aware thin privilege is a very controversial topic (believe me, we talked about it my first group at Opal and I’ve never been so uncomfortable in my life). But I’ve reached a point where I know thin privilege, fat phobia and weight stigma are real, and they are harming us all.

This is the number one reason why I’ve made a personal vow to NEVER comment on a person’s body – I don’t care if it may be considered a compliment. You NEVER know the reasons behind why a person’s body looks the way it does. Frankly, the sooner we stop assigning value judgments to bodies, the sooner we can move towards a society where this discussion doesn’t even need to be had anymore.

In all of this, I’m accepting my responsibility, but I’m also accepting that I don’t shoulder 100% of that. Here’s how I view the breakdown:

(2) The Media: the media has a responsibility to portray bodies of ALL sizes, shapes and colors, and to not edit or change bodies in order to fit an aesthetic that our culture has deemed “ideal.” It has a responsibility to not perpetuate diet and wellness culture, and to challenge that with bringing in contrarian viewpoints and idea such as Health at Every Size and the social justice issues around weight.

(3) Consumers: as consumers of media, we have a responsibility to be aware that what is projected in the media isn’t necessarily the truth, and to consume with a critical eye. We have a responsibility to consume media of differing viewpoints, to expose ourselves to, with the hopes of embracing, bodies of all sizes, to educate ourselves and learn about concepts such as thin privilege and Health at Every Size. You don’t have to end up agreeing, but education is key. And finally, if you find yourself being activated in a negative way by an image or media or a person’s body, we have a responsibility to ask yourself WHY. Why does that image trigger you? What, internally, is it getting at? And if it’s not healthy for you to consume that media, then don’t.

If I sound a bit defensive in all of this, I’m aware that maybe there’s a part of me that is. Or maybe I’m just trying to figure out how to navigate the world going forward. How am I supposed to embrace and love my body, but also not negatively impact others? Should I hide it and cover it up until society deems it an “acceptable” recovered body?

I don’t have the answers. But I wanted to say that I’m not deaf to the discussion. And instead of ignoring the conversation, I’m at a point where I want to engage in it, to learn from it, and to advocate for change. Not just with how I treat and view my own body, but how society does for ALL bodies.

Because all bodies are good bodies. And if anything is ever going to change in our fucked up culture that promotes disordered relationships with food, our bodies, and ourselves, then we need EVERYONE to take responsibility.

19 thoughts on “Our Bodies, Our Responsibility, and the Media”