As I passed a group of guys at the sandbag carry during the Indiana Spartan Sprint this past weekend, I heard “Are you kidding? She’s passing us. A girl. Fuuuuuuuuuck.”

Yay me, right? Woo women! Go chicks! How empowering and badass and wonderful!

So why did it feel so horrible? And why did it bother me throughout the race, and still bothers me, almost a week later?

Because “chicking” shouldn’t be a big deal. 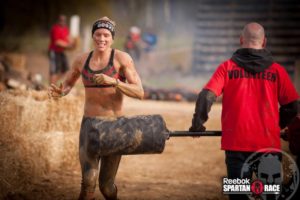 I don’t know the origin of the term “chicked,” but if you are in any type of runners circle, the term gets thrown around. It’s the idea of a woman passing a man, beating a man. It was created, I believe, as a term of empowerment, and I think serves that purpose well – you can see this in groups like the ever-expanding “Spartan Chicked,” which is an incredible forum for female obstacle racers to provide advice, tips, encouragement, and support for each other.

In the eyes of men, however, the term turns ugly. It’s a blow to the ego to get “chicked,” and it’s used by men in a derogatory manner. I get it, doods, that it hurts your ego that you got “beat by a girl,” but get over it. Your chest hair isn’t going to fall out, your biceps have not atrophied, and the size of…things…are still the same (I think).

The Elite heats at Spartan Races lead to a particularly interesting phenomenon surrounding chicking. The male heat goes off at 8am, and the females 15 minutes later. Since this has been the case, the top females have started catching up with the back of the male pack, sometimes a matter of miles into the race. In Indiana this past weekend, I caught up with the first guy on the barbed wire crawl, which was less than a mile in.

As a result, I passed close to 100 guys during the race. In Vegas, it was likely more due to the sheer number of runners (and the top two females passed even more). This requires a breathless “excuse me,” or “can I get through” or “on your left!” every few minutes.

For the most part, the guys were supportive and courteous. There were shouts of “you go girl!” or “killing it!” and those that would step aside to make way for you. But a smaller number were NOT so happy, failing to get out of the way on a single track portion, or murmuring less-than-kind things. (I suppose this is further exacerbated because they realized they got a 15 minute headstart, and the women were catching up to them).
It brings me back to my World Toughest Mudder experience this past year, when people realized I was mere minutes behind Junyong Pak. TMHQ was flabbergasted, people were besides themselves trying to understand: HOW did a female manage to get within minutes of Pak?? That’s impossible!

And the entire time, while people were running along side me to run faster, to catch up to him, I thought to myself “what’s the big deal? And more importantly, WHY are we making a big deal out of this?”

I guess it’s a reverse feminism-type of thing: while it’s empowering for a woman to beat, or be on par with, a man, the more attention we draw to it by declaring it “unreal” or “amazing,” the more we reinforce the stereotype that females aren’t, and can’t be, equal to males.

[Yikes. That’s the most feminist thing I’ve ever said. And that’s a lot of phrases in a sentence. I’ll stop now.]

Don’t get me wrong – I’m beyond proud of my finish at WTM, and at races like Indiana. But, in a way, it saddens me to think that people still believe that it’s “abnormal” when a woman can beat the vast majority of the men at an event like this. And it’s frustrating that men are affronted by the fact that a woman could possibly best them.

So let’s change the conversation. While running with the “lead” girls at the Kids Race, I noticed that none of the little boys were saying similar things as the girls flew by. So here’s to hoping we can take the negative out of “chicking,” and just realize that some girls kick ass.

[stumbling down off my soapbox]