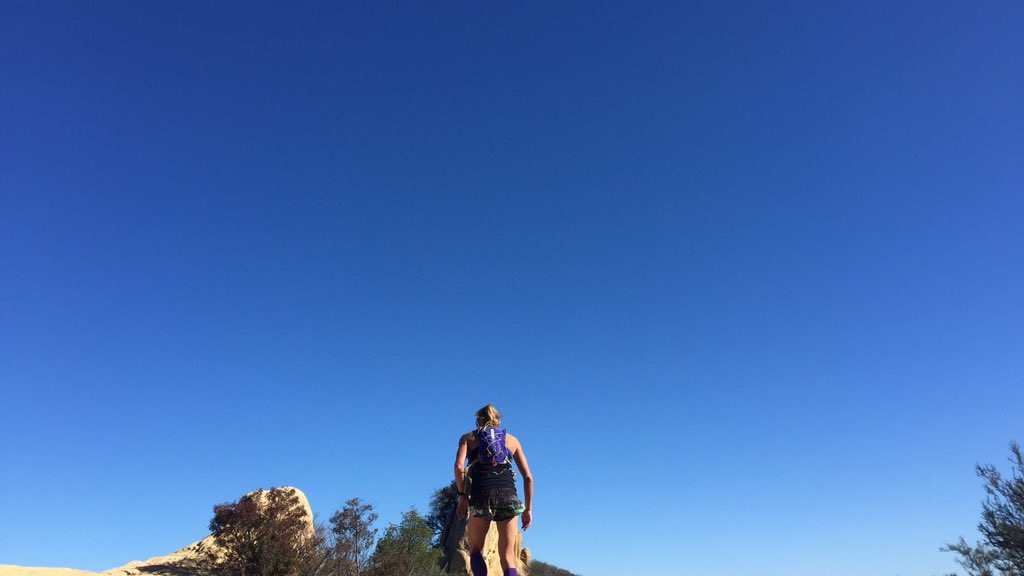 In November, I made a really bonehead move. After securing a Western States lottery ball with my Georgia Death Race (and first ultra) finish last spring, I completely failed to submit my qualifying time in the window provided. I could give excuses – it was the week before World’s Toughest Mudder, I had just moved to California and started a new job, etc. But in reality, I just blew it. I was angry at myself for a hot minute (though, the chances of making it in the lottery to the prestigious Western States was like……zero). But I quickly got over it, and moved on. Besides, I wasn’t READY for Western States, I told myself. Plenty of time for that, Amelia.

But when OCR season wound down in November, I was looking for a late-winter, early spring ultra – something to fill my “offseason.” Lo and behold, Sean O’Brien 100k appeared on ultra sign-up. And lo and behold, it was a Golden Ticket race (top two male and female finishers get an automatic entry into Western States). So in a state of irrationality, I thought “hell, if I’m such an idiot that I can’t even properly get into the lottery for Western States, maybe, just MAYBE, I’ll just run my way in.”

So I hatched a plan. Ill-advised, yes. Piecing together training as I went, I prepped for my second crack at an ultra, knowing that the first one left me…humbled and puking my brains out. And as SOB weekend approached, doubt, insecurity and fear crept.  In a come to Jesus moment, I tempered my expectations: don’t worry about Western States – just run to finish, run to enjoy, run to improve on the GDR disaster, run to see if I really like this whole ultra thing (WHAT DO I DO WITH MY HANDS?!), and let the chips fall where they may.  Sure, I could run and annihilate some tiny local ultras with a handful of participants, but I was anxious and curious to see how I could fare against “the big boys.” So, with full plans to be embarrassed and humbled and needing to drop down to the 50k or 50miler, I showed up (last minute, as usual) on Friday before the race.

Pre-race, my only reassurance in the whole “in over my head” mess came from Devon Yanko, ultra runner (and baker!) extraordinaire, and on my list of the coolest people ever. When I moved out to the Bay Area, she welcomed me in with open arms, letting me chase her around the Mt. Tam trails. So when she entered SOB to get that Golden Ticket, I was stoked. Because I like friends out there. I like cool people. And having her at the start line put me at ease.

With a 3am wake-up, race morning rolled around. Because true “race reports” normally bore me to tears, I’ll give you the CliffsNotes version:

Mile 26-35: Running 2nd, came up upon Devon who wasn’t feeling so hot at the time. Red flags went off for me, mainly because I thought catching up with her meant that I was pushing too fast at this point in the race. I sang some Lion King to her, we chatted a bit, and she told me to move on.  And as I passed her, I told her “shit I have a feeling I’m heading for a blow up.”

Mile 35-42: An all too familiar twinge in a calf came back as I was flying down a long descent. Flashbacks of Spartan World Championships this past fall in Tahoe flooded back. The constant seizing of the calves. The (only) 7 miles of torture in which I tried to fight them off and cursed my body for betraying me. Except this time, we were only at mile 36. I had 26 (not 7) miles left to go. So I slowed the pace a bit. Slammed some mustard packets (to no avail). Welcomed the uphills where I could stretch out my calves. And switched to an intentional heel strike on the downhills to keep them lengthened.

Mile 42: Dipped watermelon in a vat of salt at an aid station in an act of desperation. [Note to self: there’s such a thing as TOO much salt. Holy balls.]

Mile 42-55: If you ever decide to run SOB 100k, know that this stretch is what glorious nightmares are made of. A 14ish mile out and back – 7 miles down, turn around, 7 miles up. Along with the seizing calves, I started to bonk on the descent. Around mile 45, a cheerful voice singing the Lion King rolls up behind me – Devon. And honestly,  never been happier to see someone. She was looking stronger, and I told her to go get it. And as she passed, she reminded me “eyes on the prize – first or second. Western States.” So with a smile, and a renewed vigor, I pledged to hold strong. (And I also pledged, that if I did manage to get that Golden Ticket, I’d get a coach. As much as I pride myself on making this shit up, perhaps it’s time to enlist some real help so as to not absolutely embarrass myself.)

Mile 55-62: Rolling through the last aid station, still was holding on to second (by how much, no idea). 7 miles left. Found Taylor Swift’s “Out of the Woods” on my iPod, put it on repeat, and ran through feeling like I was repeatedly being shot in the calf with a BB gun like I was being chased by a…person coming after my Western States spot. You know those terrifying “being chased” dreams? Yeah. That.

Crossing the finish line, I welcomed a big salty hug from Devon, put my hands on my spasming quads, and heard the magic words “congrats, you’re going to Western States.”  If I thought I was playing with the big boys at SOB, I had just run my way into the Super Bowl of ultra marathons.

Like 99% of people out there, I make lists at the beginning of each new year. Goals. And as I said in my last post, in 2016, I was going to focus on finding new joys. On hunting new challenges. Of trying new things. And running long. And, unfortunately, like most people, I fail to follow through. Things get in the way. Obligations. Self-doubt. Practicalities.

But, with SOB, and now an automatic entry to Western States, I have that opportunity. Doing Western States as my first 100 miler?  No one has ever accused me of taking the easy way (my introduction to Spartan was the Death Race, and my first “real” Spartan race was the 2012 Ultrabeast). So I’m looking forward to the challenge ahead.

In an ironic (and semi-cruel) twist of fate, Western States starts at the same location as Spartan Race World Championships did last year and will in the fall. The first four miles of the course are pretty much the same (well, if I convince WS to put in some walls and monkey bars). I get two shots at Squaw this year.

Finishing time: 10:42:11
Placement: 2nd woman, 4th overall
Elevation change: 31,000ft
Nutrition: Beet Elite (one packet pre-race, one at mile 36); Tailwind;  Clif Blocks, supplemented with a few potato chips, boiled potatoes, flat Coke and watermelon at aid stations
Biggest takeaways: Nutrition was better (despite a bit of a sour stomach), but have to work on the calf cramping issues (I’m convinced it’s fatigue, not electrolytes). And pacing. So, get a true plan and a coach.
Post-race recovery: I’m a firm believer in movement and mobility. So walking several miles around the streets of Venice on Sunday; 20 mins with a spin bike, LOTS of mobility and personal time with a rumble roller and baths of epsom salt baths in the following days. I’ll take at least a week off from running (mainly because I can’t fit my feet into shoes right now).
Toenail casualties: 3 and counting.
What I was singing to myself: Split evenly between Hey Marseilles’ “West Coast” (cliche, I know), and AJ Style’s WWE entrance music. And T-Swift on repeat for the last 7 miles.
Pre-race Pop-Tart flavor: Watermelon. Surprisingly, not too shabby.

(And if you are looking for an ass-kicking and well-run ultra (with beautiful scenery to boot), check out SOB. Keira, her team, and her volunteers were absolutely amazing.)